A Visit From Japan

A long overdue update, but my friends have implored me to write it down. In the last update I talked about the Artsy Fartsy Afternoon I had after my Visit from Vietnam. Today my treat for you is a Visit from Japan and how I spent Chinese New Year 2016.

Last year, my dear Japanese friend Takeshita 竹下 “Under the bamboo” came to visit me and Joke in Belgium and we had a wonderful time. She had been a classmate of us in Suzhou. This is my favourite picture I have of her, entitled “Takeshita under the bamboo” 竹下の竹下. 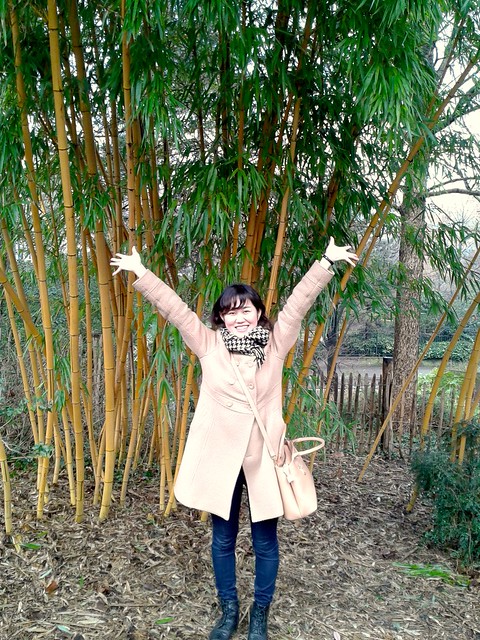 At the end of January she came for a weekend to Taipei, all the way from Japan. She had so much luggage with her — a whole handbag. She told me that the flight attendants were perplexed, and so was I. However, I think it was magical, like Harry Potter, for she seemed to be able to find everything she needed at a whim, and we all know that is not a given with the vast oceans that women’s purses often are.

We first went to the Confucius temple (note: I have written about these temples and spots before, so just read more posts on my blog if you want to know more about them), where we did the customary jumping picture. 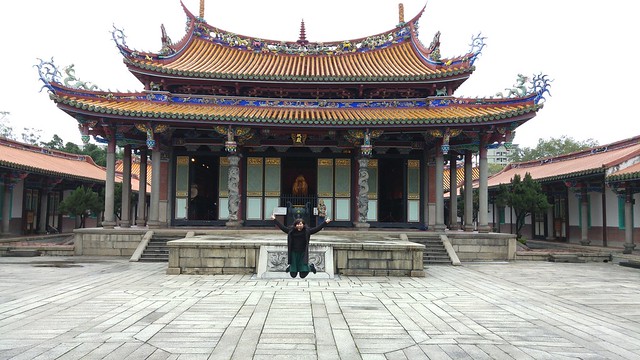 Afterwards, we saw how clean they kept the Bao’an temple, by using a toothbrush. I wonder which toothpaste they use to clean though. 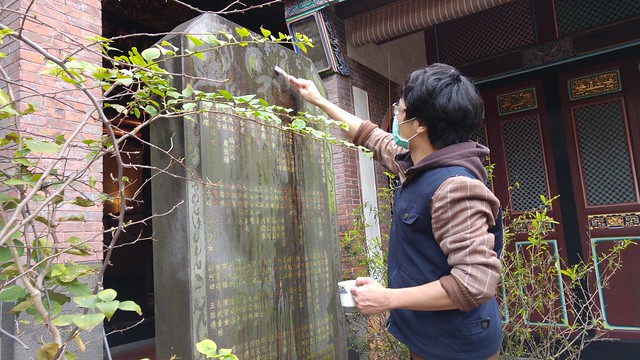 Later we went to Jiufen, but it was raining and misty, so it wasn’t that much fun. However, I think she had some fun because she got to see the teahouse from the award winning anime movie Spirited Away. Here is the teahouse with Takeshita: 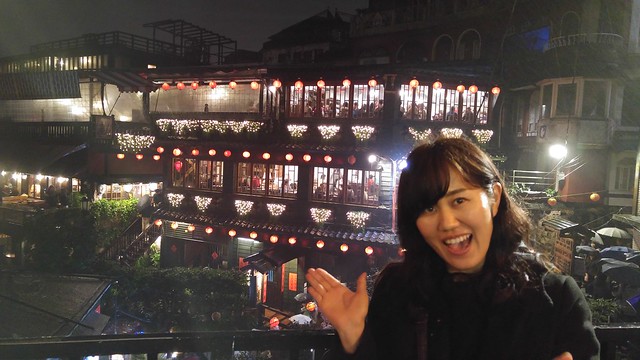 The next day, the weather gods were nicer to us. We went to see Chiang Kai-Shek’s and Sun Yat-sen’s memorial halls, saw Taipei 101 – the big tower –, had lunch in Din Tai Fung and went inside the City Hall. Here’s pics: 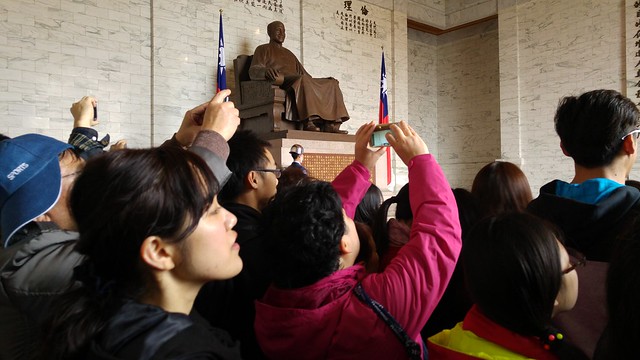 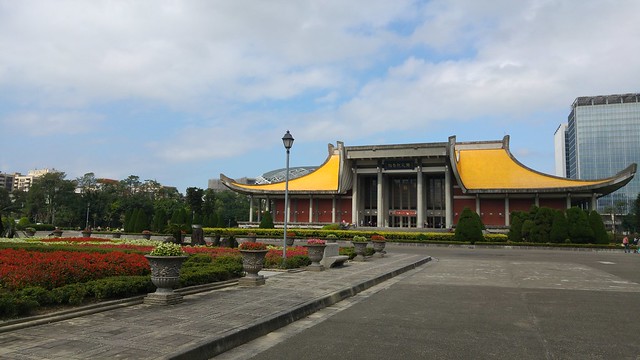 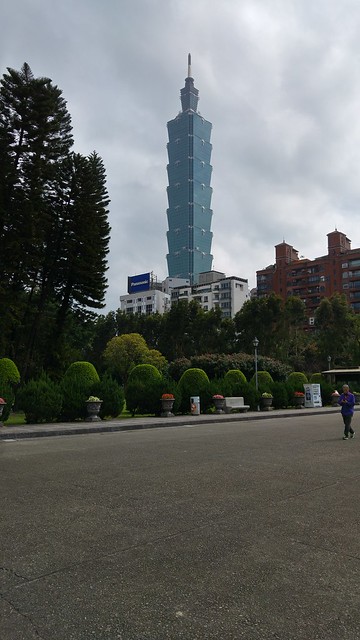 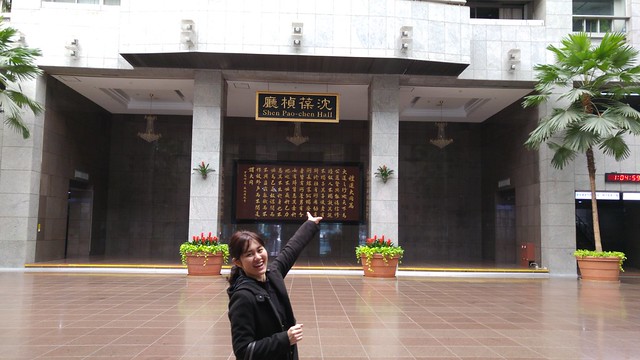 Lastly, I had to say goodbye to Takeshita, after a pleasant weekend of catching up and sightseeing. But not before taking a melodramatic selfie at the airport bus and the obligatory funny picture, “Sailor Bamboo”: 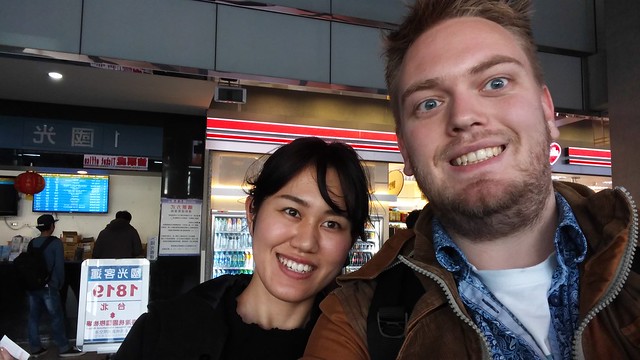 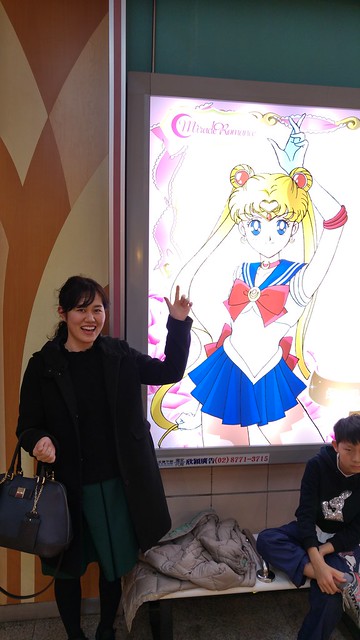 About a week later it was that time of the year in the Chinese world — Chinese New Year 2016. First I had a small celebration organised by the university for those students who would not be going home. There were two foreigners (I mean, possibly more, but I only saw myself and a Latin kind of guy at the far end of the room) and I was seated with people I didn’t know and who cared more for their phones than for conversation or food. Nevertheless, it was a nice kind of show they wanted to do and we even got red envelopes from the university, so thank you NTU! At the end of the evening there were some funny fotoshoot moments which I will share with you: 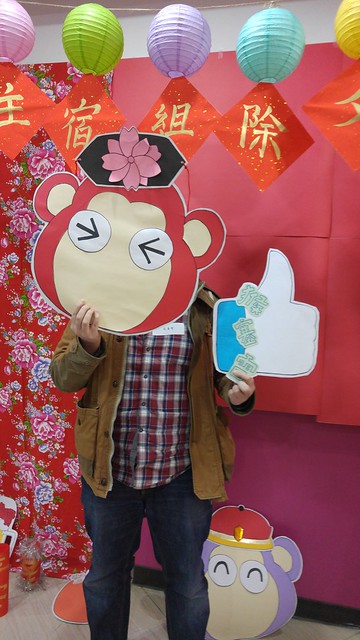 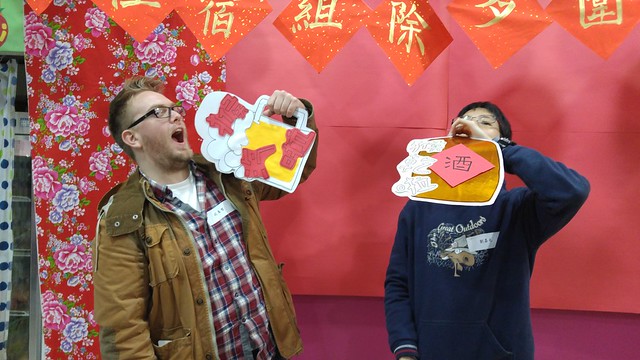 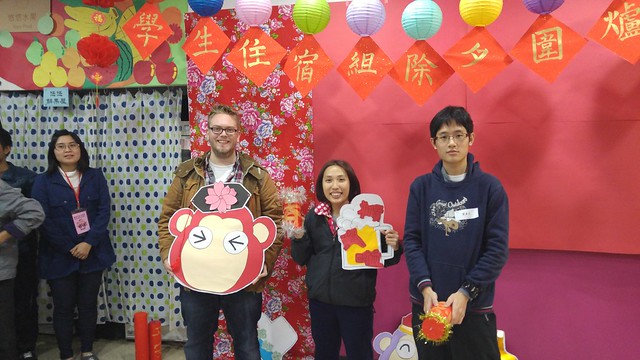 The next day I had a new visit from Japan! This time my very good friend Ann-Sofie, who succeeded me as president of my student organisation Eoos, and here Korean friend Su-chan came to visit me. They were both studying at Kobe University and their academic year, which starts in March in japan, had just ended. I was very happy to see her (well, them) and speak some normal Dutch again. First we spent some time roaming around Ximen, where their hostel was located, and tried to find some food. This was not an easy task because everything was almost closing for the big celebration that night. Fortunately we were able to go to some temples, like a very clean Bao’an temple: 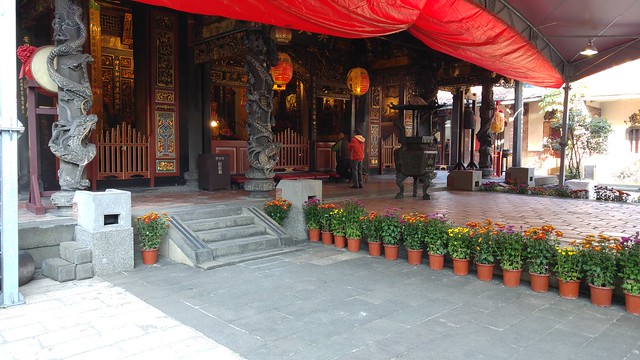 How did we celebrate Chinese New Year you may ask. Well, we went to my almost adopted/host family — my good friend Hsuan’s family — for the big celebration. A-ma had cooked so much super tasty food and it was just delicious and just so much and it was such a fun night. Here is our family picture: 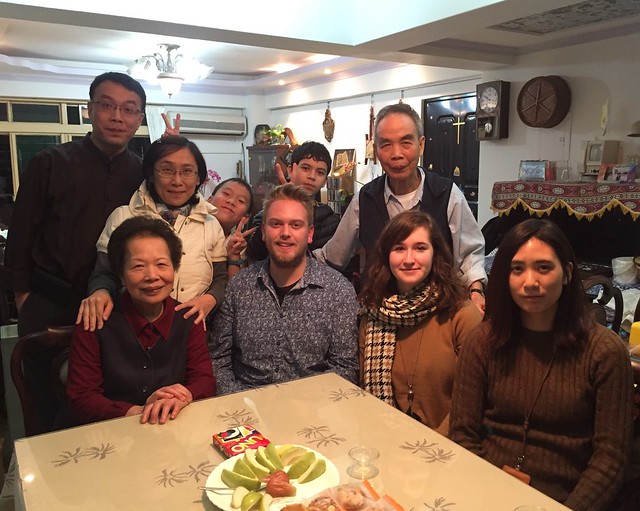 The next days, the weather gods still seemed appeased and allowed us to visit my campus, the presidential palace, the old hospital (Taiwan’s Gasthuisberg for my medicine student friends at home). 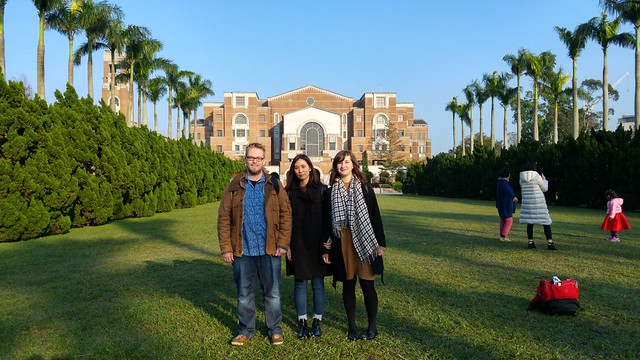 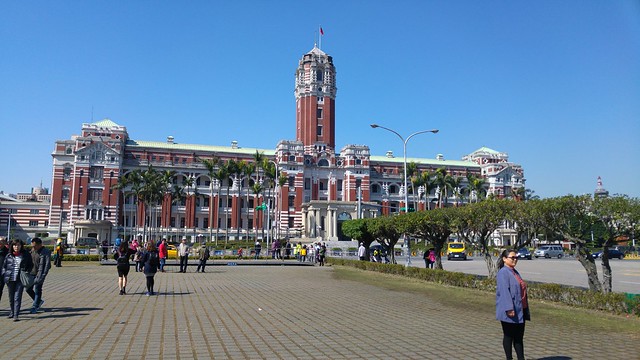 We also went to the Palace Museum, where there was a new exhibition about Catholic missionaries etc. I got to see the world map the Belgian Jesuit priest Ferdinand Verbiest 南懷仁, who became the court astronomer to the Qing Kangxi 康熙 Emperor (1661-1722) and is very important for European-Chinese relations during the later Empire. 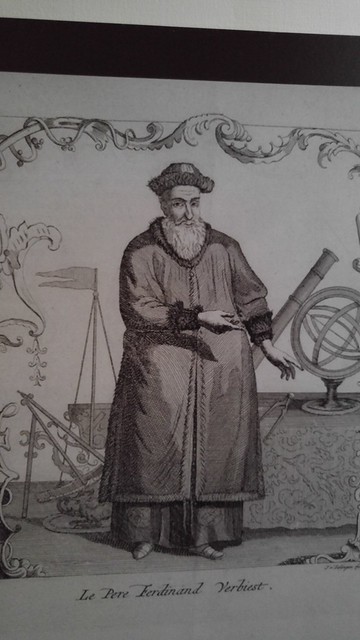 The latter part of the visit was filled with trips going to Tamsui (this deserves a future post), night markets, hat shopping, Din Tai Fung, Jiufen and Maokong. Here are some pictures: 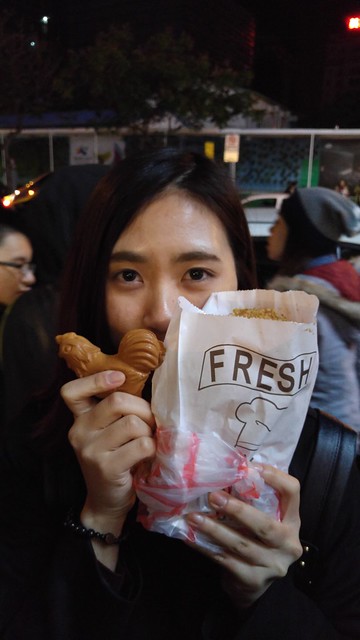 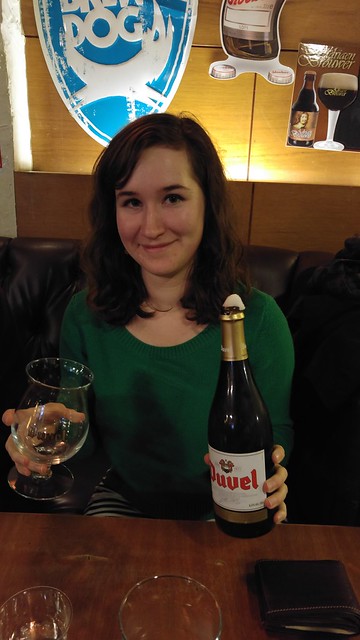 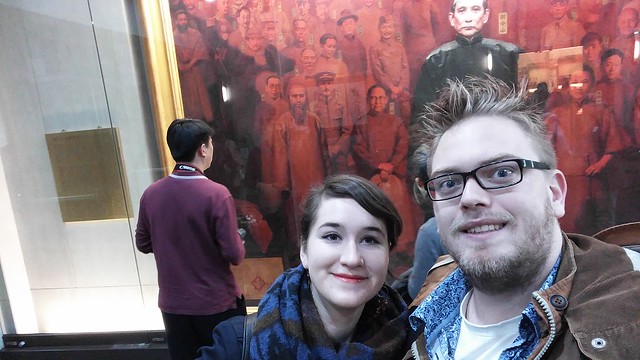 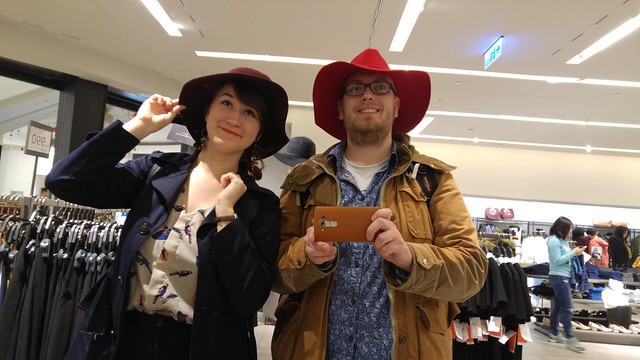 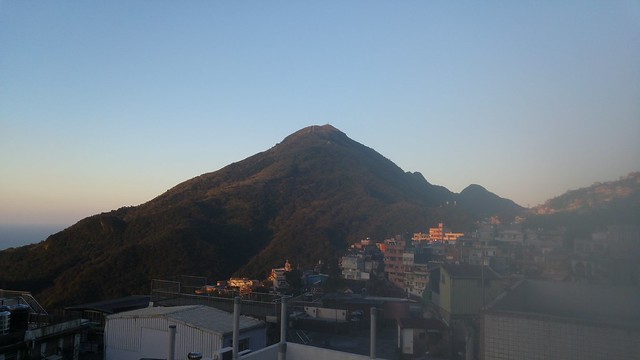 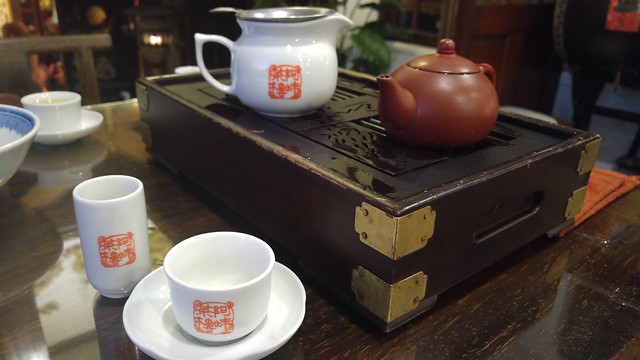 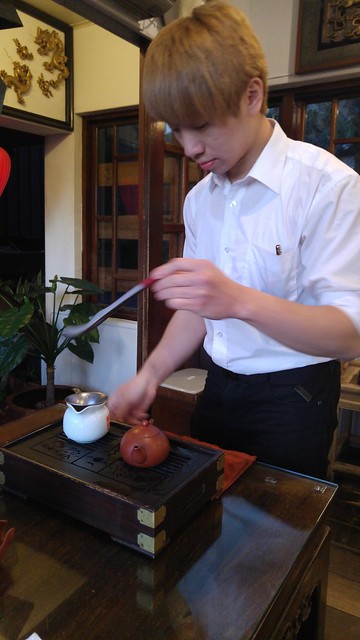 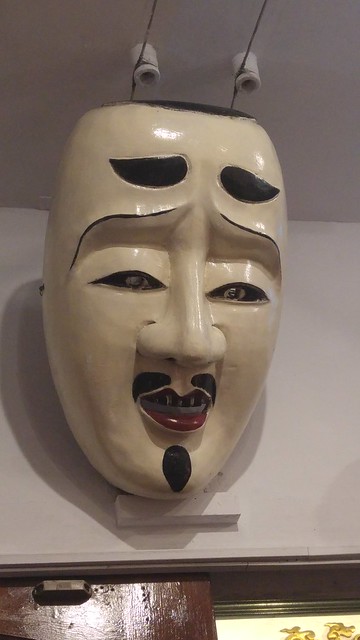 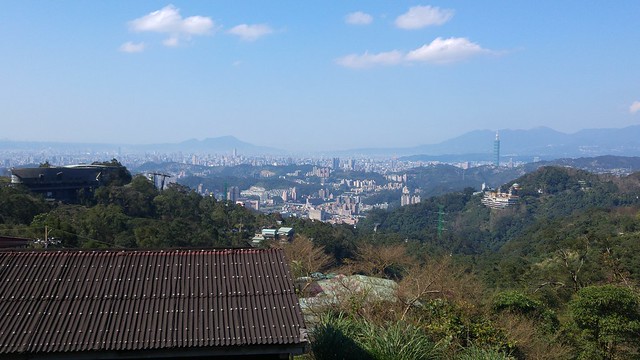 And lastly, there is a group photo, rather unprofessionally taken against the light (this was my idea), of a very nice moment. Thank you for visiting me, Su-chan and アンスヒー!* 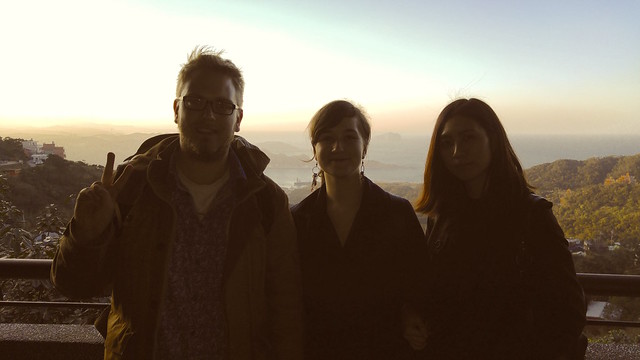 *Ann-Sofie always complains about people not writing her name correctly. I did the same to her one time, even though I didn’t do it intentionally, I wrote her name as アンスヒー rather than アンスフィー. #sorrynotsorry