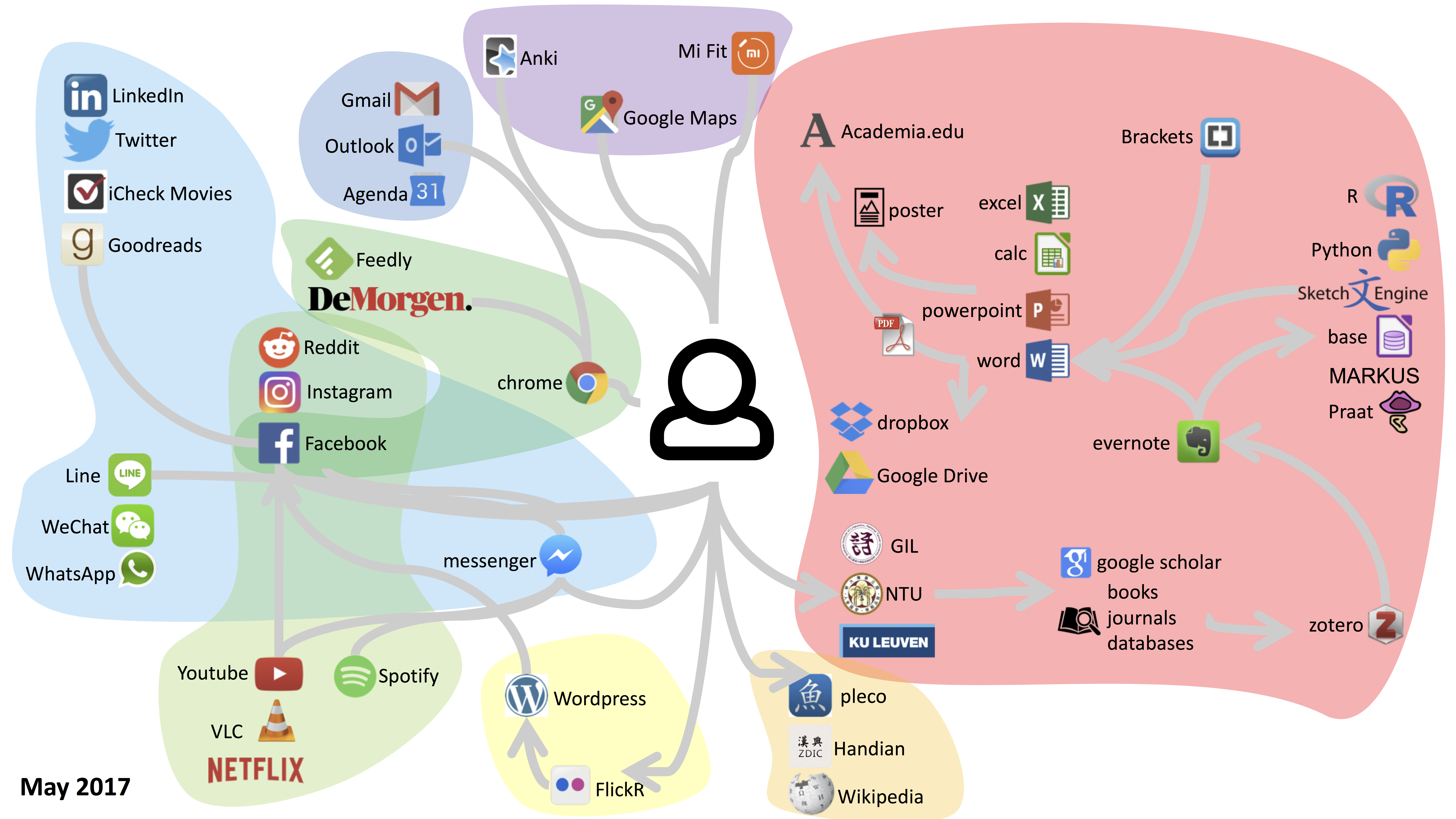 Icons We Live By

Icons We Live By (Academic Workflow 1)

Let’s talk a bit about research. I know, I don’t often do that on this blog — some of you might even have the impression that this is only a travel blog or something similar, but in fact travel is very peripheral to my life, although I like to flood my social media accounts with nice pictures of said travels whenever possible. So, this is a direction I want to take this blog to. I hope you will still like it, and if not, at least I will have gotten out of it what I wanted, namely, to describe a bit how my research process generally works.

In most recent years it pops up more and more in articles that deal with educational techonology. And I first ran into it when I was secretly browsing the course materials of ‘Encyclopaedia of Japanology’ taught at the University of Leuven^[The parallel ‘Encyclopaedia of Sinology’ class I had to take was a bit more traditional in its outlook. In itself this was not a bad thing, but I wished there had been a bit more attention to digital media than there was back then.], taught by Hans Coppens. If you want a librarian’s view on what a PLN (Personal Learning Network) is or can be, I found Faisal’s paper very useful. However, for me it can be loosely characaterized as a representation of all the different media you consume (input) and produce (output) in your day-to-day life. Since our current life is largely dominated by a certain need or at least reinforcement to be interconnected^[I know some people actively try to resist this trend, and in some way I respect it, but for me it is not entirely possible. People I am referring to are my dear fellow student Ruei-Liang, who is a hardcore advocate of paper; or one of my favourite writers on the subject of (academic) productivity, Cal Newport.], I have decided to use the icons of the apps I use most in my daily life to chart what my PLN looks like. However, I should say, that before we can dive into the current state of affairs, we must first go back to about a year ago, let us say May 2017. Get set? Ready? Go!^[Yes, the careful reader will have noticed that this is not the canonical order of these sentences. However, the Crayon Pop girls seem not to care.]

I think this picture is a pretty good estimate of what my personal learning network looked like about a year ago. Let us go over this network following the colours of the rainbow.

I first start with the output part, because I am pretty proud of that. This workflow has been a few years in the making, but about a year ago, I already had a pretty good flow I felt: for school (university) work, I would typically first access Google Scholar, library websites or other databases, or more general books or articles. The records returned I would then store in a reference manager, such as Zotero, and in a note taking app, such as Evernote. I plan to do an overview of this “gathering” phase of research in a future blog post, as it is quite crucial to the way I do things — it is pretty customized, but I believe it is a very adoptable approach. Then, from Evernote (and the preceding books, articles etc.) I would start to write my papers, of course interacting with new data in other databases, or annotation tools such as Markus or corpora such as Sketch Engine. Then, as a word processor, I would — as I suppose most of my peers would — use MS Office programs such as Word, Powerpoint^[My favourite drawing tool.], or Excel. It must be said that by last year Excel has been slowly replaced by open source variants such as LibreOffice’s Calc, for the simple reason that the Windows suite tends to use a lot of hidden code that (can) severely mixes up the data when you import it into R or Python. So, for output formats, posters would usually come from Powerpoint; and documents from Word (in PDF) format. These I would then store locally, in cloud formats such as Dropbox and Google Drive, as well as on a regular back-up hard drive. Other dissimination includes of course, book chapters, (future) Journal articles, but also such services as Academia.edu. The status of the last one is still not entirely clear, though: it is for profit, but it also has a very low threshold and the publishers are afraid of it because they see their ginormous profits trimmed down slightly.

The next part is pretty easy, it includes a daily dictionary app for Chinese called Pleco, which is free and the best on the market as far as I know. Message to future sponsors: Should you be in the dictionary app business for Chinese, please send me a free sample and I will review it for you. Online, however, I like to consult the Handian 漢典, also known as zdic.net. Similarly, Wikipedia is probably everybody’s go-to site (well, not the Chinese who can always ‘Give Baidu a try’ 「百度一下」). I don’t think this category needs much explaining, but do let me know if you want to know more about a particular tool.

This is what you are looking at right now. I generally use FlickR to store my picture, to embed into a Wordpress-driven website. In the very beginning of my ‘blog’-life, I was at Blogger, but then I moved to Wordpress - still available at sinologica.wordpress.com, should you be in a nostalgic mood and want to read my stories of China (in Dutch). Later on, I used the Wordpress software to self-host, and now that also has changed (see next post).

For music and films, I generally turn towards Spotify, Netflix, Youtube, or apps that can help me play media, such as VLC. In written media, I tend to turn to my RSS feed, using Feedly - just a collection of blogs I think are interesting, such as the one on Akkadian history run by my Assyriologist friend from Leuven, Céline Debourse. Other news media I peruse include a Belgian newspaper, De Morgen (although I sometimes follow the rabbit hole to less-reputable Het Laatste News “the latest news”). Then, of course, we cannot deny the social aspect of news these days - which I think is where this whole PLN analysis shows its value: Reddit (for Taiwanese readers: 「非台灣人的PTT」) is an online forum where literally everything can be discussed. Facebook and Instagram are very informative as well, although their fun and thus slightly addictive nature must not be denied.

Apart from the previously mentioned social media ‘media channels’, there are apps to stay in contact with people at home and friends. As I am in the position of having to deal with Europe, China and Taiwan, I have become subject to installing three different apps, depending on the dominant one in the region: Line for Taiwan, WeChat for China, and WhatsApp for Europe. And, as my good friend Guillermo aptly remarked:

Ay Tomás, they are all fucking green!

Yes. They are. And I always press on the wrong one…

Other apps in this category include the professional network site LinkedIN. I get a lot of ‘friend’ requests on this one, but I don’t really use it to its fullest potential, although I like to think that is because academia ‘works differently’. Let’s see how the future thinks about that.

Then, almost lastly, there are the social movie check site iCheck Movies and the social book reading site Goodreads, which I occassionally add the things I read. Note that I have to read many books for my PhD, and I already catalogue them in Zotero and Evernote, so I don’t always update these accounts.

Lastly, we have Twitter, where I very sporadically unleash a tweet upon the world. I hope you catch them when I do.

For these I am mostly reliant on Outlook.com and such Google products as Gmail and Google Calendar (called Agenda in Dutch).

Violet: some other apps

For learning words in a language, I like to rely on Anki, since it has helped me ‘cram’ in the past. I need Google Maps in my daily life, or I will lose my way and disappear. And to track my footsteps, I like to use Xiaomi’s MiFit. I’ve thought about that biodata that China then would acquire of me, but my own curiosity to monitor myself is too great. Besides, at this point, the data will be given to another party anyhow…

Rainbow: putting it all togehter

So, yes, that was the state of affairs about a year ago. As you can see, there are different ‘categories’ in my life that are dominated by different apps, and I am sure that for most of my readers, it must be very similar, whether you are a linguistics student or otherwise engaged with the world!

In the next update I will go over what has changed, but it mostly concerns the whole research output section. In the meantime, I hope you can think a bit about which apps influence you in your daily life. And I hope that you even chart your PLN, so we can compare! Or if you have any lifehacks or academic hacks, please do let me know!

That’s it for today!

Peace out! And Happy Easter!