Summer is almost over and I know you must have been dying to read an update on this blog! Or maybe not, but you’re still reading this, so welcome dear reader. In this update I will mostly talk about my adventures in July, but will do a quick recap of what happened after the previous post, which detailed the lovely experience I had doing fieldwork on Bunun.

End of the semester

So the last weeks of the spring semester 2016 were filled with making presentations and writing papers. All in all, I had to write three of those. So for the fieldwork class I wrote about Nominalization in Isbukun Bunun; for Language and Culture I wrote about the Eurovision Song Contest; and for our seminar I redrafted my paper for the CLDC conference, which I wrote about here. There are some pretty exciting plans for the latter, but I won’t spill any beans until they are confirmed :).

In the beginning of July I flew back home. It was a hell of flight. My airplane between Taipei and Beijing (I flew with Hainan Airlines) was delayed due to ‘bad weather’, which meant I sure as hell wasn’t going to make my flight from Beijing to Brussels. Stranded in Beijing with an American guy who didn’t speak Chinese and was bound for Poland and a Chinese guy who didn’t speak English, I had not only try to find an acceptable alternative for myself, but also for him. Eventually, the Chinese guy used Wechat to book us on flights to Berlin, where I had to change to one to Brussels. I was stressed out and I spent most of the flight semi-sleeping. Eventually I did manage to get to Belgium, where I was greeted by my mother, but not at the gate; instead she (and all the other welcoming committees) were kept from entering the airport, Belgium still being under terror level 3 after the attack on the airport in March.

I first had a few days in Belgium, while I was interviewed by MO magazine, about a precious piece of clothing. It was my friend Ellen who did the interviewing, so thank you for that :) The article can be found here. 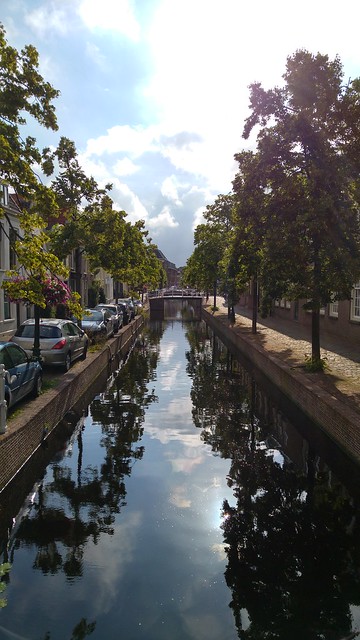 Then I went to my Summer School on Chinese and Digital Humanities, organized by Leiden University (in the Netherlands). I was a bit nervous, as is always the case when you will be dropped in a group of people you don’t know. Fortunately, there was at least one person I knew, Chen Yanrong, who is doing her Ph.D. on Christians in China at my alma mater and is making a database about that. It turns out Leiden is not a shabby city at all — not that I thought it was before going there. Of course there are windmills, two to be precise. 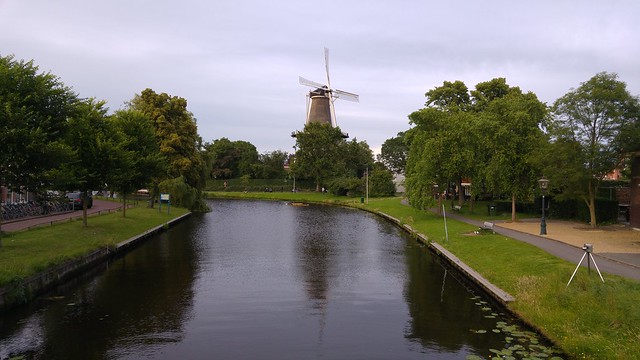 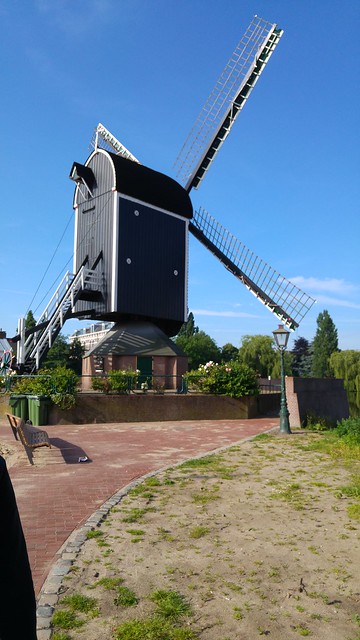 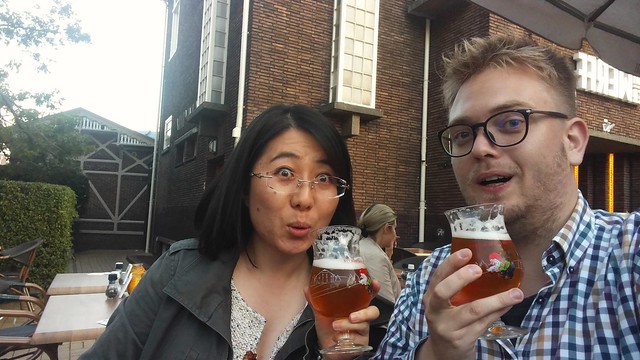 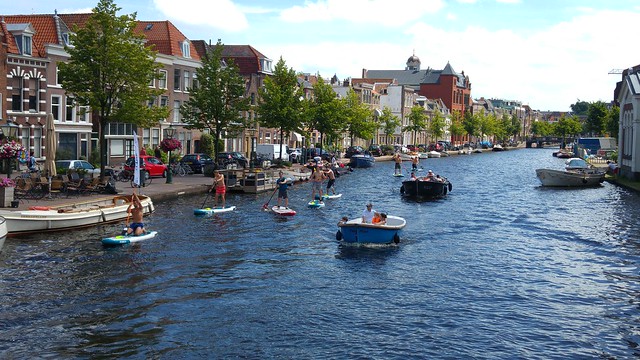 The sessions themselves were also very interesting, ranging from practical advice on how to write proposals, data management and legal questions about data sharing to the more ‘new’ stuff: intros to text mark-up, text mining, database design, spatial analysis, network analysis etc. I did get the feeling that most of the summer school was oriented at historical research than linguistic but there were some German ‘pure’ linguists there nonetheless. Those who have me on facebook or twitter (@simazhi) must have noticed the twitter storm marked by the hashtag #CHDH16, coming from someone who doesn’t tweet often (enough??). However, since this was a conference on digital humanities, I felt it was very appropriate to do so this time.

So, what did I get out of the conference? Quite a lot actually. Apart from meeting new researchers and thus establishing a better network (guanxi people!), I got to learn about what is buzzing in the digital sinological academic world. The best for this display of research was at the obligatory poster sessions every evening, an event I had feared but had prepared for back in Taiwan with the help of my professor, classmates, as well as my designing wizard friend Lucio Lu. He convinced that powerpoint was not a designing tool, and my friends, especially of my student organisation Eoos, must know that I am a big fan of powerpoint as the go-to tool for almost everything; so convincing me that there are better tools is not easy. Well, I mean, I know there are better tools, but I mean tools for the layman. Anyway, I asked him to help me make the poster and this is what we came up with: 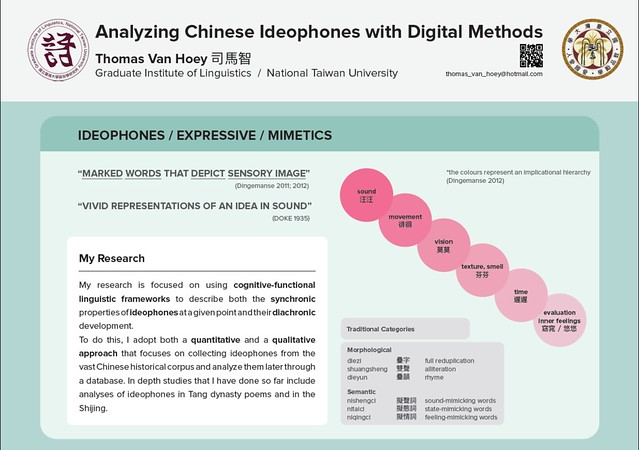 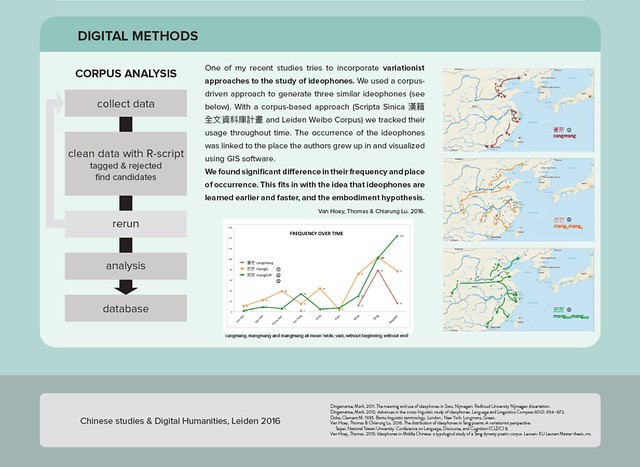 I am rather happy with the result, it catches the eye well enough and also is not too cluttered with text. I also think that posters serve as an intro to your work, rather than a full paper. Feel free to ask me about it next time you see it :).

The second thing I learned at the summer school was that I did need a new approach to my work. No longer do I think excel files are the best way to store my data. TBH, I didn’t think it was before, but I didn’t know how to improve it. Thus came the introduction to relational databases by Michael Fuller, who together with Peter Bol form a team of Harvard professors that work on a database with biographical data: the China Biographical Database (CBDB). This is a wealth of information that makes it possible to investigate different relations between people. It comes in an Access format, as well as an SQLite version. And at Leiden University they have made a Mac dictionary based on the CBDB for easy reference. I decided to turn my data gathered so far in a relational database. Since I am a big fan of open source software (and well, Access is not accessible (pun intended) on Mac – seriously, Microsoft, do something about this) I decided to give Libreoffice Base a chance. Currently I am still in the process of migrating the data, but I think this will eventually lead to a more efficient use of my data (note: there seems to be an extension in Excel called Powerpivot, but the durability and the un-open-sourceness bugs me). I am planning to do an update about this in a future post. Anyway, here are pictures of me doing my presentation: 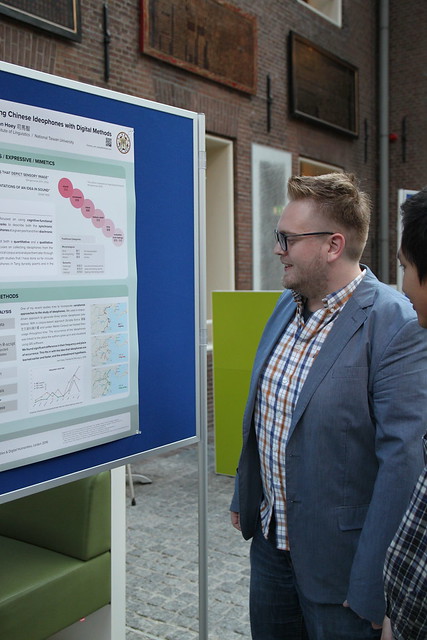 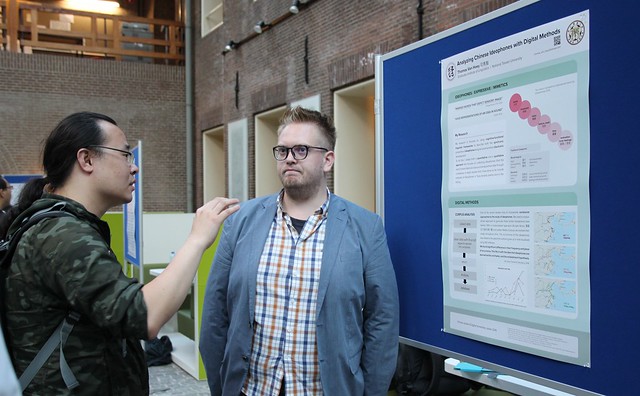 The third thing I learnt in Leiden is some applications of data, but more importantly an application for data: Hilde De Weerdt from Leiden University and her team have developed MARKUS, which is an annotation tool for texts. I think this is a very useful tool for me, because it will allow me to spot ideophones in texts, mark them and add them to the aforementioned database. This will allow for an even better analysis and well, better research.

Apart from the conference we of course did some sightseeing, notably the famous library of the Sinological Institute, which houses the biggest library on China in the low countries. 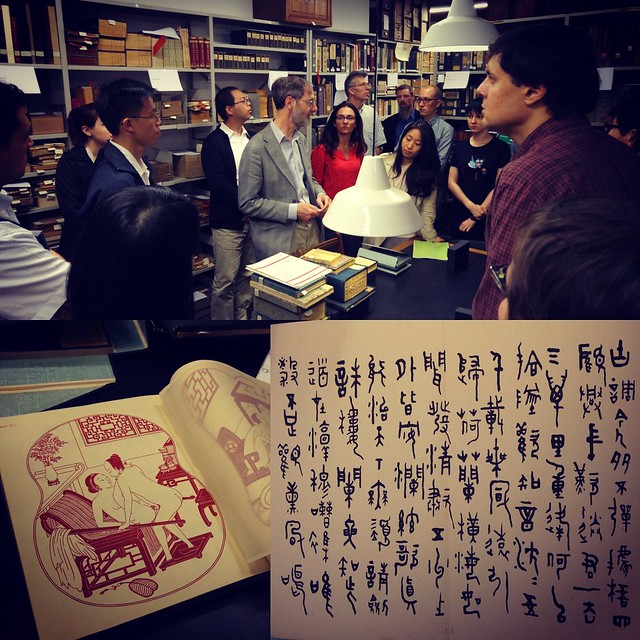 There’s also a nice museum of peoples all around the globe, the Volkenkunde Museum (the ‘the’ as article sounds really weird if you know the word is neutral in Dutch). 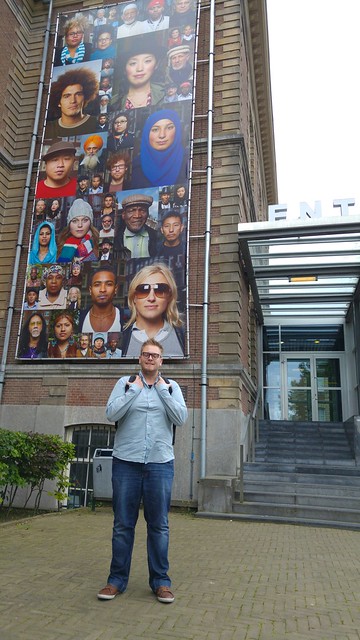 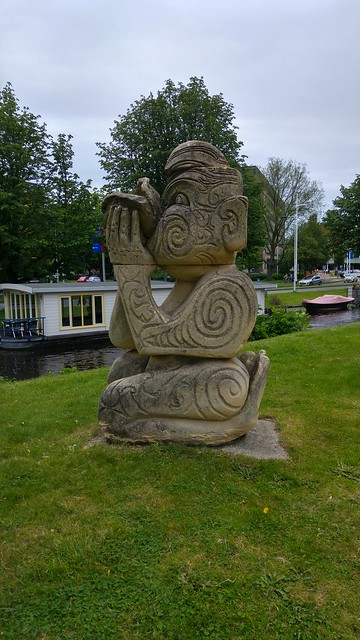 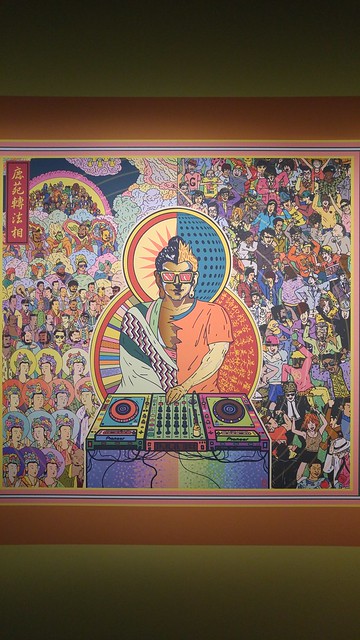 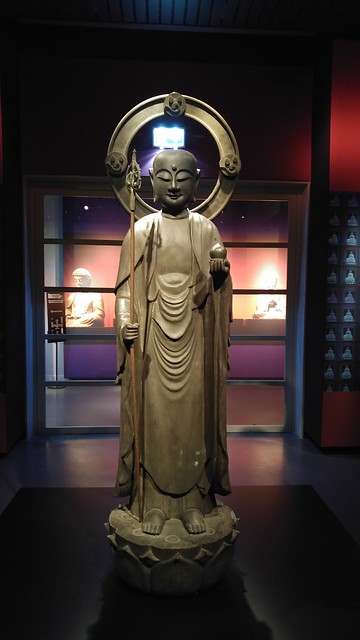 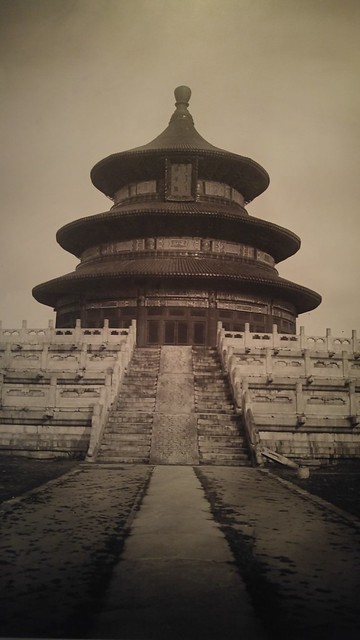 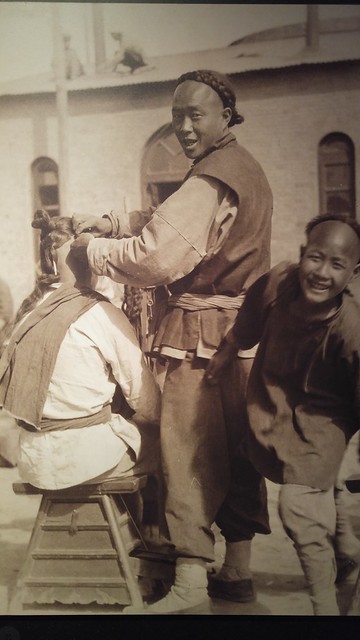 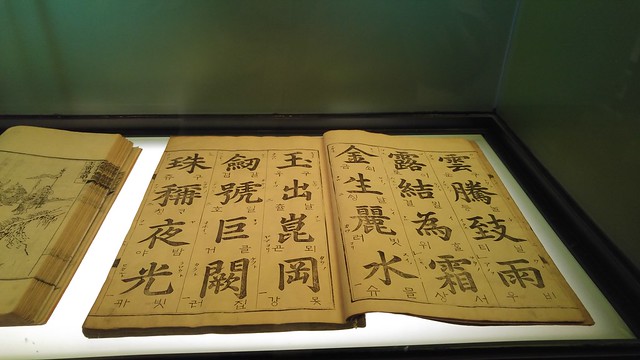 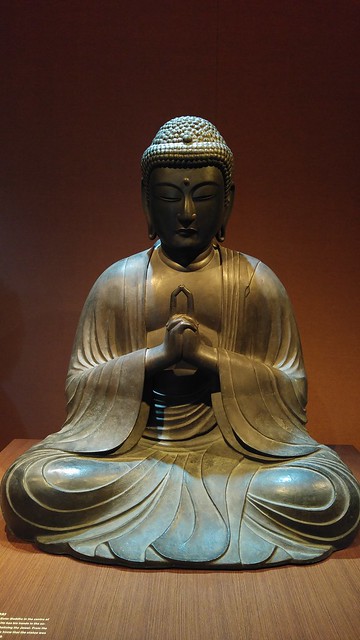 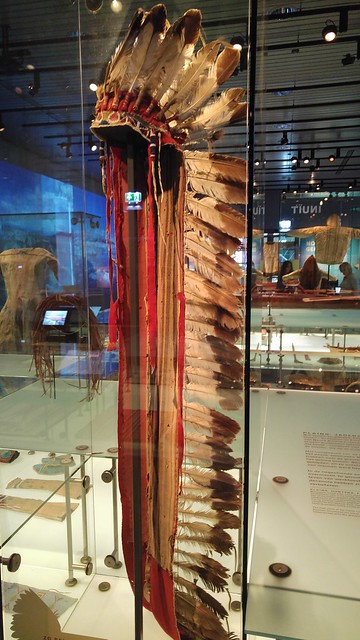 So, after a turbulent journey back home I had a really nice stay in Leiden. Stay tuned, because Berlin is coming up!