Scholars embarking on their scholarships

Here we are again - after a few weeks of battling the tasks imposed by finals. My friends had warned me before:

"Whaaaat, you have taken 15 credits (of courses this semester), you will collapse during finals"

Apart from the very interesting usage of that last word - _bengkui _‘collapse’,  which seemed to be used for ‘the realm/our land collapses’ (tianxia 天下) or ‘the emperor dies’ (e.g. Wen di 文帝) in the earliest sources and is now applicable to ‘normal people’ - they were right. The pressure was noticeable and I am sure now that 1 study credit here has a higher BMI than one in Leuven, to which I already hinted at in September.

In this post, I will tell you all about the scholarship award ceremony, which took place on 18 December 2015. As is often the case, these things are planned to the detail and two and a halve weeks before that date, I received an e-mail, asking me if I was interested in doing a speech in Chinese on behalf of the foreign PhD students who got the same scholarship as I had received.

It has a very long name, but I am really glad that I got this opportunity to thank the university and all the people involved in the selection process. So, after replying affirmatively I set out to organize my thoughts and I wrote a speech (first in “Englutch”, which is still the easiest way to organize my thoughts) and translated the whole thing into semiformal Chinese. (For more of my translation projects of Chinese short stories into Dutch, have a look at the project Babel 101).

I then had a friend (kudos for A-hsing/Mergen!) who helped me ‘Taiwanize’ or ‘Chinefy’ the whole text. After that, it was read over once by Amy from the International Office (IO), followed by a visit in person to that same office and an out-loud rehearsal, followed by a few more adaptions, and a last reading by another department. So, the text was heavily edited, but this was a good thing - I once had given a speech after returning from China and the unedited text I presented did not “fall in good earth”, but that was an interesting experience from which I learnt a lot.

Okay, if you have been reading so far, I assume you want to see the ceremony and/or know the content of my speech. Your cravings will be fulfilled in a bit. First let us have a look at the stage at wich I was to ‘perform’. 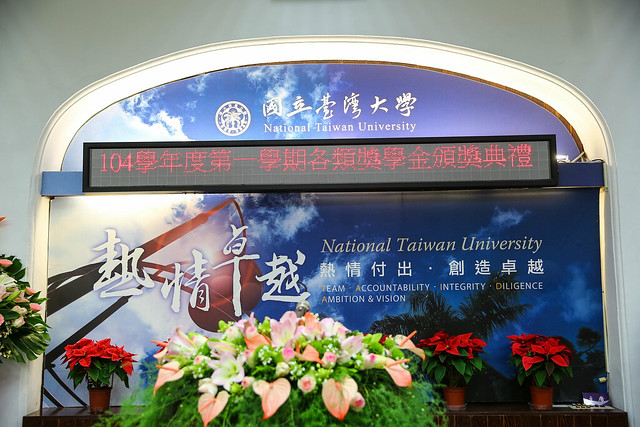 As you can see, it was a beautiful stage, in the Administration building. From top to bottom we can see the logo of the university

It features the Fu Szu-nien 傅斯年 bell, which commemorates the fourth rector after taking over the university from the Japanese. You can see _Guoli Taiwan daxue 國立臺灣大學 “National University Taiwan” · dunpin lixue _敦品勵學 “integrity, diligence” · _aiguo airen _愛國愛人 “patriotism, compassionate”. This is translated and adapted in the English motto “Integrity, Diligence, Fidelity, Compassion”. Below that, on the picture, you can see in red letters 104 xueniandu di yi xueqi minglei jiangxuejin banjiang dianli 104學年度第一學期名類獎學金頒獎典禮 “scholarship award ceremony of the first semester of the 104 year [of the ROC, which started in 1911 - yes I’m born in the 80s here in Taiwan]”. Then below that, in calligraphy you can read reqing zhuoyue 熱情卓越 “enthusiastic and outstanding”. Juxtaposed to that, you can read “National Taiwan University - _reqing fuchu _熱情付出 ‘enthusiasm pays off [?]’ _chuangzao zhuoyue _創造卓越 ‘creating excellence’ - Team, Accountability, Integrity, Diligence, Ambition & vision” This last one is an acronym that spells out TAIDA, the common abbreviation in Chinese for my university here. 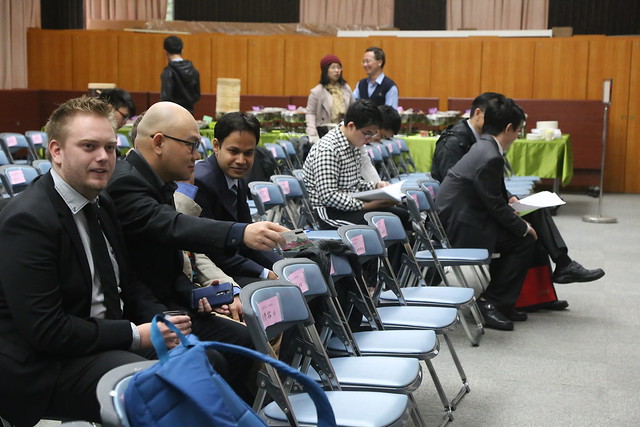 Okay, that was a lot to analyze in one picture, but it shows how the stage is important for official affairs. After arriving a bit early on the set - a tip we learnt from Prof. Standaert in Leuven - I got the chance to rehearse a bit. After most awardees arrived, we did a general rehearsal and then the clock struck 12 and the game was on. The officials arrived and we performed the roles we were given - entering the main stage when our name was called. The whole thing was very official and was filmed entirely. But, I assume you are interested in pictures of me and my receival of the scholarship, so here is a picture of that. 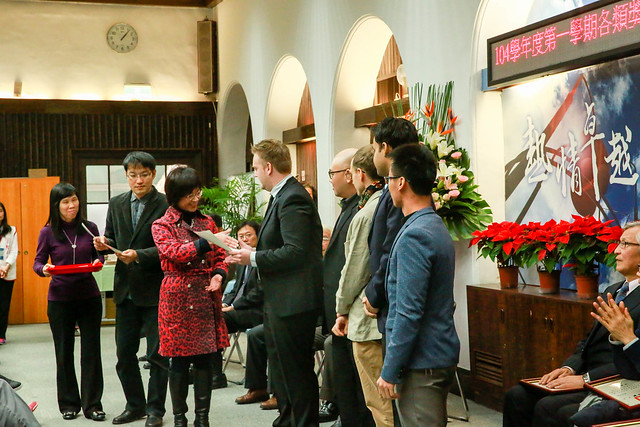 The woman who hands over the notice is the president of the committee that decides who gets a a scholarship [me! me! me! :D ]. Unfortunately, I kind of forgot her name at the moment, so if a reader can tell met that, I would welcome it very much and edit this piece in the post. After that, it was time for my speech. I got on the stage - well, the tribune was removed so I was standing behind a microphone (with my speech in hand as I had been told would be okay). 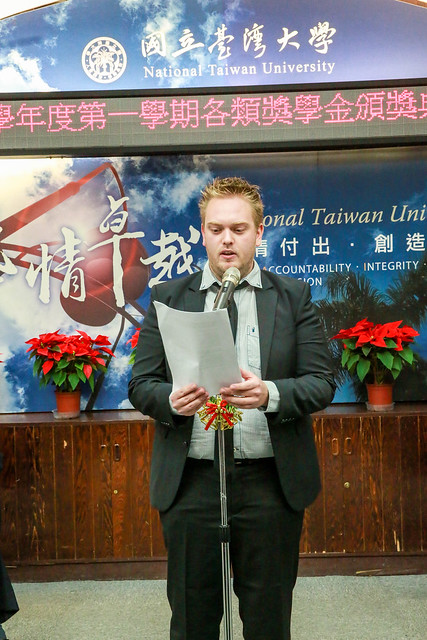 And now it’s time for my speech. First the youtube version [GO TO MINUTE 4 FOR ME] to hear my speak:

And now for the words with translation. I should mention that I wrote this speech with the thoughts of trying to describe what pertained to all the participants - even though that is difficult for I had not met any of them before. So apart from the university and the members involved, I am of course very grateful to all the people who got me here, which in the first place is my parents, but also my previous professors, my current professors and of course my dearest friends:

Dear rector, every teacher, every classmate:

My name is Sima Zhi (Thomas Van Hoey). I come from Belgium and am currently doing my PhD at the Graduate Institute of Linguistics in this university. I feel very honoured to represent and speak for all recepients of the Research Fellowship for Outstanding International Doctoral Students.

First of all, I would like to express our luck of being able to come to Taiwan to study.

It is, however, not my first time to Taiwan. Last year during the summer, I attended a summer school organised by NTU, called “Translating Chinese”. At the time, I thought Taiwan and NTU were superb – the environment is really nice, the people are super friendly, the culture is so interesting etc. So I figured, if I had the chance, I would definitely come here to study.

And then, in the autumn of 2014, I got an e-mail explaining how NTU would have this kind of scholarship from the beginning of 2015. I was thrilled to hear this news, and I immediately started preparing the required documents.

This year in April, I got the news that I was accepted. Furthermore, I had gotten this scholarship. So I was not only happy about it, but also tremendously impressed of getting this change – so many years of studying very hard have finally paid of. And this also encourages further study!

So, what does this scholarship mean to me?

Firstly, it is a chance to continue studying.

Secondly, it is a chance to start researching.

Thirdly, it is a chance to deeply experience Taiwanese culture.

Fourthly, it is a chance to meet new friends and establish new connections.

Lastly, it is a chance to help us view the world from a different perspective.

I firmly believe that if we take this chance, we can change the world.

In the Great Learning,one of the Four Books, it is said that:

“Such extension of knowledge lay in the investigation of things.

Their knowledge being complete, their thoughts were sincere.

Their thoughts being sincere, their hearts were then rectified.

Their hearts being rectified, their persons were cultivated.

Their persons being cultivated, their families were regulated.

Their families being regulated, their states were rightly governed.

Their states being rightly governed, the whole kingdom was made tranquil and happy.” (tr. James Legge)

The ‘investigation of things’ talked about means ‘research’. And it is fundamental. By using this fundamental thing, we can make the world a better place.

That is why, I think, no, I am sure that us recipients will exert our utmost efforts to return this chance given by NTU, so we can be proud of ourselves, so NTU can be proud of us, so we can advance the scientific field, and we can make the world a better place.

Thank you for this opportunity.

After the speech and the end of the event, there was a lunch event and photo-picture-taking-time event. Here is a pic of me and the rector of NTU (to my right) and the vice-dean of the Faculty of Arts (to my left). 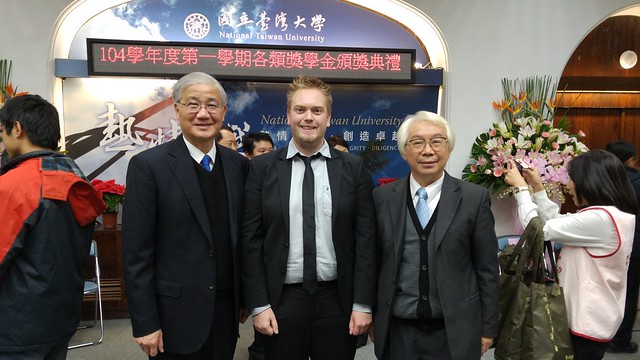 This is the Chinese version of the text. It was also published completely in the university newspaper (the article can be found here).

And, finally, as a last picture: it is the degree itself! Congratulations if you made it this far - next time I will talk about Christmas and New Year! #CatchingUpAfterBengKui 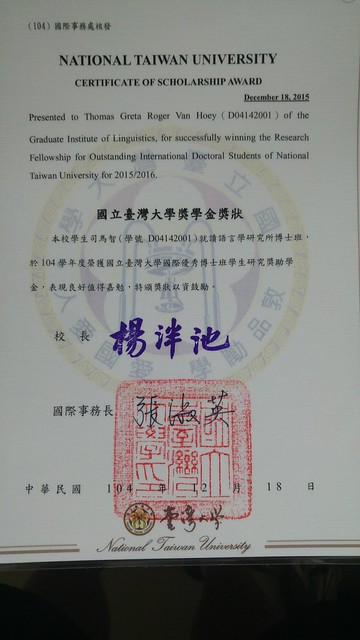