Honglonglong is the sound of thunder 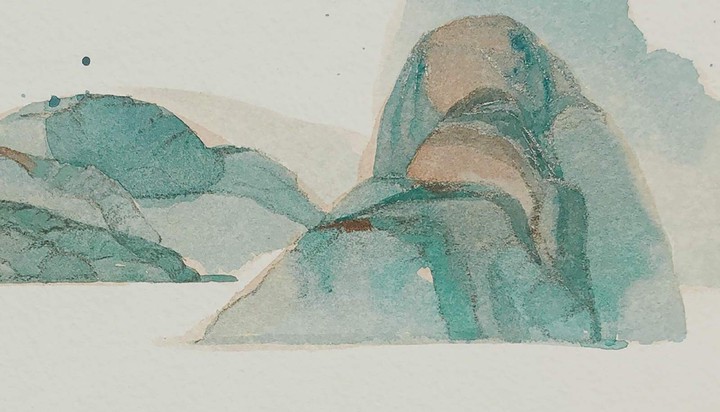 I don’t often see poetry books that immediately make me go OMG must have but this interview with poet Fāng Shāngyáng 方商羊 piqued my interest, especially when I saw he had written a poem called 轰隆隆 is the sound of thunder.

Fang’s debut collection Burying the mountain is available since the end of October of 2021, and a copy of it currently finds itself in my shopping cart, patiently awaiting the moment I decide to pull the trigger and press the button which will send it on its way to me. So far, I haven’t but the day is definitely drawing closer.

In any case, you can find more about the poet from his twitter or the collection from the publisher. Currently, that page features him reading some of his work in a video, which I will embed here first.

While there is something in the way he’s reading poetry that I find slightly off-putting, I can’t help but respect how he appears to be visibly captivated by his own writing. Admirable.

Thunder only happens when it’s raining

However, Fang is maybe not why you’re here! You’re perhaps wondering why I am writing about him and his work on this blog. When I saw in the aforementioned interview that he had written a poem entitled 轰隆隆 is the sound of thunder, I knew I had to see what that was all about. After all, I have a greater-than-average interest in Chinese onomatopoeias and ideophones. And I also happen to have written about iconicity in meteorological expressions before!

In my paper “Does the thunder roll? Mandarin Chinese meteorological expressions and their iconicity” (Van Hoey 2018, doi: 10.1163/23526416-00402003) (Contact me if you want to read a copy but you don’t have access), I talk about the two kinds of motivation that we can observe in weather-related ideophones.

A first kind, let’s call them colloquial ideophones, are formally marked in their phonology, mostly through different types of reduplication (full and partial). The way iconicity or sound symbolism works in these words is that when you try to map aspects of the sound on the meaning of the expressions and notice a resemblance. For instance, the back vowels and nasals /oŋ/ in hōnglónglóng perhaps evoke the rumbling (notice the back vowel and nasal in rumbling) of thunder. Or in ablaut ideophones like xīlī huālā or dīdī dādā you get that alternating “over here (high vowel /i,i/) … over there (low vowel /a,a/)” effect. Combined with the fricatives of /x/ and /h/, it’s easy to imagine a kind of sluicing rainfall in xīlī huālā. And then l- reduplication is well-known in Chinese as a marker of continuation. Compare this to the unaspirated alveolar /d/’s of dīdī dādā that indicate drips and drops.

Just so we’re clear, I’m not saying these words are compositional in the way Hamano has argued for Japanese, but conversely that I can see how structural mappings can be identified or imagined.

The second kind, literary ideophones by lack of a better term also typically display formal phonological markedness (full or partial reduplication) and also sometimes some phonesthemic-like elements. However, what sets them apart is that they can rely more on radical support. Radical support is the idea that the graphical form of a (Chinese) word contains a semantic element that is expressed, often repeated, that indicates something about the meaning of that word. Most people know that onomatopoeia (sound ideophones) in Mandarin often have a 口 MOUTH element, e.g., jījī zhāzhā 嘰嘰喳喳 ‘sound of birds chirping; sound of people chattering’. But literary ideophones typically have other radicals. In the examples below WATER 氵 and RAIN ⻗. They are also typically older and not as in use in spoken language as the colloquial ones; but of course, they often turn up in song lyrics, sung in karaoke bars. So I wouldn’t flat out say they don’t belong to the contemporary Chinese, just that there is a genre effect.

Hōnglónglóng is the sound of thunder

Anyways, I can go on and on about these words but it’s now time to turn back to Fang Shangyang and his 轰隆隆 is the sound of thunder. I will present the poem below, which, in the spirit of fair use and commentary on (please Shangyang Fang or publishing house, I do this out of love and don’t come back to sue me, I hope you sell many copies), I have augmented with pinyin in red so as to show how to pronounce these words and so that you can enjoy the poem to its fullest.

Also, pay attention to what kind of ideophones are used here. They virtually all belong to the colloquial stratum, which tells you that indeed, we should be reading the poem out loud to make most sense of it.

Finally, I hope the lay-out matches that of the original poem but I can’t be sure. Just know that it’s supposed to have a few lines per paragraph usually.

In fact, 簌簌 sùsù is the sound of all soft things falling
The tears 簌簌 sùsù on the face. The snow 簌簌 sùsù.The begonia 簌簌 sùsù
on the mahogany bone of a folding fan. 簌簌 sùsù the brushstroke
paints the rice paper into a landscape of black mountains
泠泠淙淙 línglíng cóngcóng the rivers flow where the inked mountain is not depicted
flow in the uncharted whiteness

The bold strings 嘈嘈 cáo cáo like blizzard, the fine strings 切切 qièqiè like murmur一
the melody of a girl playing 琵琶 pípá on the orchid boat
back in the Tang dynasty which we still hear through 白居易 Bái Jūyì’s poetry

If the river could speak, would the mountain understand its utterance
The sound of a frog is 呱呱呱 guāguāguā, which is annoying
If you cannot stand the 呱呱呱 guāguāguā, please put the frog into a boiler
The hard part: try not to mourn the frog

In truth, 式微 shìwēi is 王维 Wáng Wéi writing a poem to the shadow of his leaving friend
who promised to come back with a sprig of magnolia to light up the yard
His poem has the sound of clouds spread low on the moving water

For us, the petals fall with no sound. For the fire ants, the petals hit
the ground with a sound as loud as thunder, which is 轰隆隆 hōnglōnglōng

Buy his book if you want to support him or read all of his poems.